Direct from the West End, the acknowledged master of psychological illusion returns to the stage with his latest show, Derren Brown: Infamous, demonstrating once again why Derren is one of the world’s most renowned live performers; a dark manipulator of magic and mind control.

For Infamous, a more ‘personal’ show, Derren is re-united with his close collaborator and friend, actor/writer Andy Nyman.

Derren says 'Now we’ve joined forces again, we’re very eager to make this show feel different. There was something of a template we followed with all the shows, which worked very well. It’s rather exciting and scary leaving that behind. This one should certainly have a different tone, and will mix things up a bit for those who have seen the others on TV or live'.

Infamous is Derren’s sixth show since 2003. He has toured every year since then and has been watched by an estimated audience of over 2 million people. He has won two prestigious Olivier Awards, for Something Wicked This Way Comes (2006) and Svengali (2012), and confesses that touring is still his favourite thing to do.

★★★★★
'His richest and most surprising show yet. Simply gob-smacking, I’m left speechless, the only thing to say about it: GO'
SUNDAY EXPRESS

★★★★★
'It is on the stage that he really comes alive – relishing the chance to stun and baffle his audience. He truly has to be seen to be believed'
DAILY MAIL 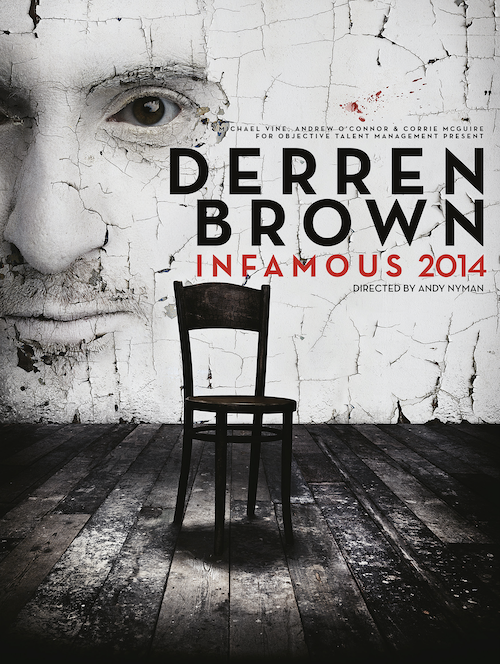